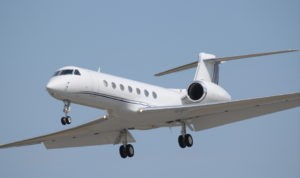 While government and business users have historically had to manipulate flight plans to avoid gaps in coverage and performance, the test flight enjoyed complete flexibility in route selection. The flight route spanned the Northern and Southern Hemispheres, beginning in the United States with stops in the United Kingdom, the United Arab Emirates, Thailand, Australia and Fiji.

A Global Xpress subscription-based data plan was configured for the Honeywell aero Tail Mount Antenna (TMA), with a committed information rate of 4Mbps forward and 1Mbps return but capable of 15Mbps or more. Uniform coverage and service was delivered to the aircraft as it moved across 28 beams with handovers that went unnoticed by users; and 3 satellite-to-satellite handovers that were accomplished seamlessly.

The terminal’s global plan enabled access to the Global Xpress network worldwide without the need to pre-coordinate and receive satellite-specific option files. During the flight, Global Xpress supported mission-critical voice, data and streaming applications to include video teleconferencing, high-speed Internet access and file transfer, VPN as well as phone calls, and fully delivered or exceeded the committed information rate.

Inmarsat’s always-on worldwide capability for VIP aircraft customers is part of the company’s global mobility-centric strategy, unique in the market. Inmarsat has been supporting the demanding ‘go anywhere, anytime’ nature of aviation operations for decades, and is the market leader in providing a consistent, reliable L-band connectivity experience for users around the world. Global Xpress continues Inmarsat’s commitment in this arena.

Inmarsat offers Global Xpress as an end-to-end managed subscription service – SATCOM as a Service – that enables access to an always-on, worldwide network with 24/7 management, monitoring and support. With no infrastructure charges or R&D investment on their part, customers travel from one location to another, and simply ‘plug in’ to Global Xpress to get what they need, where they need it, and when they need it.

“This Gulfstream IV ‘Around the World’ test flight demonstrates Inmarsat’s ability to deliver reliable, seamless next-generation wideband connectivity for aeronautical users,” said Steve Gizinski, Vice President of Special Programs, Inmarsat U.S. Government Business Unit. “Highly mobile, bandwidth-hungry government and commercial users can now travel the world and enjoy connectivity that allows them to conduct business as if they were in the office … even while 40,000 feet in the air.”

About Inmarsat Government
Inmarsat Government is a leading provider of secure, reliable and affordable mission-critical telecommunications to U.S. military, intelligence and civilian organizations. Equipped with the industry’s leading satellite and terrestrial infrastructure, it delivers custom, end-to-end networks and solutions that can sustain communications anytime, anywhere. Inmarsat Government, a wholly-owned subsidiary of Inmarsat plc, and an authorized Value Added Reseller (VAR) for Inmarsat Global Xpress, is responsible for Inmarsat’s retail U.S. government business. It is headquartered in Reston, VA, with network assets and operations around the globe.

About Inmarsat
Inmarsat plc is the leading provider of global mobile satellite communications services. Since 1979, Inmarsat has been providing reliable voice and high-speed data communications to governments, enterprises and other organizations, with a range of services that can be used on land, at sea or in the air. Inmarsat employs around 1,600 staff in more than 60 locations around the world, with a presence in the major ports and centers of commerce on every continent. Inmarsat is listed on the London Stock Exchange (LSE:ISAT.L). For more information, please visit www.inmarsat.com. The Inmarsat press release newsfeed and corporate updates are on Twitter @InmarsatGlobal.

Back to Press Releases